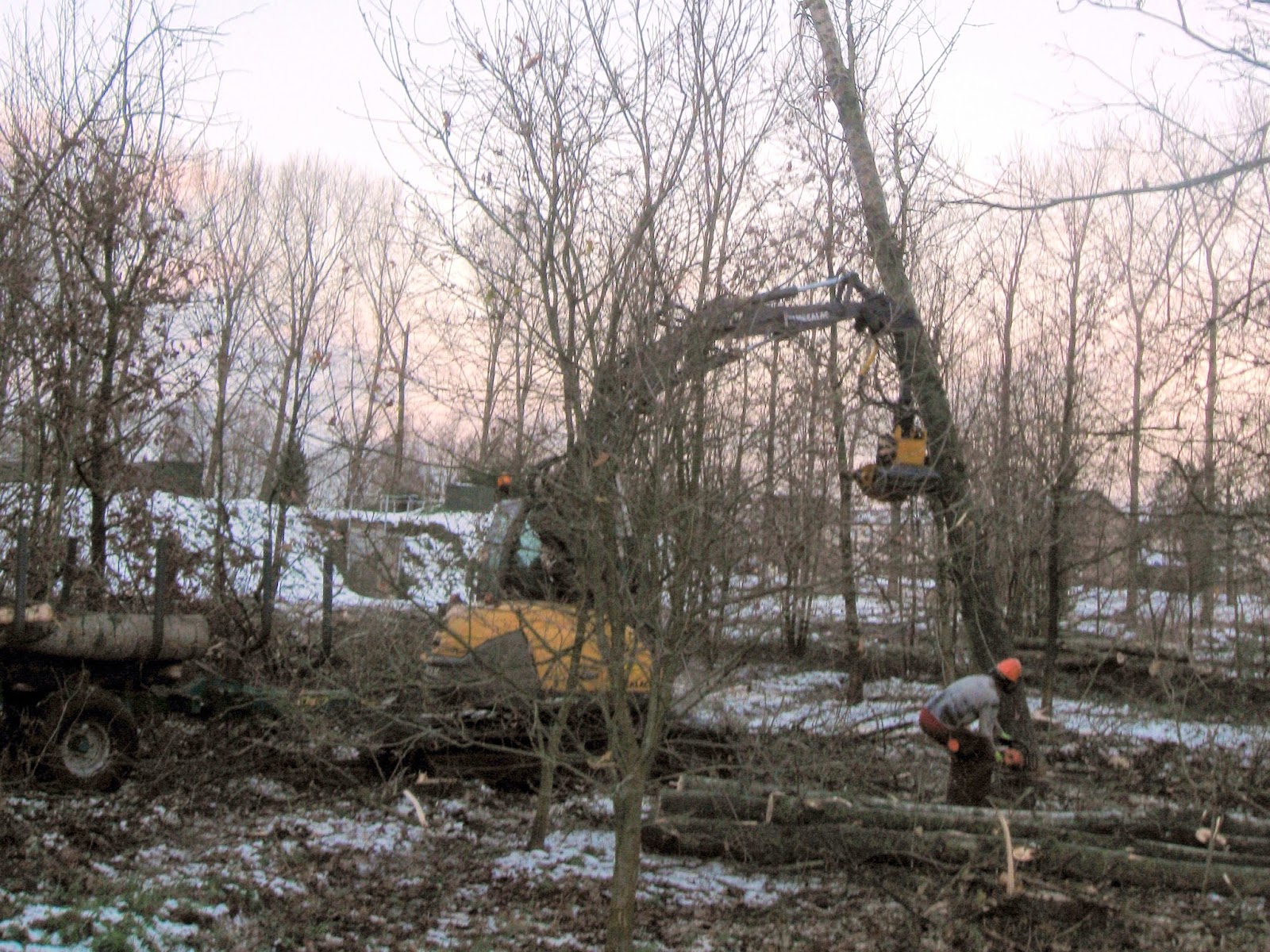 Monday, 29-December-2014 - Veghel - Hired by Veghel Township and using state-of-the-art logging equipment, Van Weert Rondhout BV was clearing tall popular trees from Geerbos woods across from our housing area.  According to Van Weert, this was to give shorter oak trees a better chance to grow.  I was sad to see these tall trees go. When we moved here 18 years ago, we were happy to be situated near a stand of tall trees.  In recent years, many these populars have been harvested to comply with a European subsidy obtained more than 25 years ago.  pics (46)
Posted by dale weiss at 8:33 AM 1 comment: 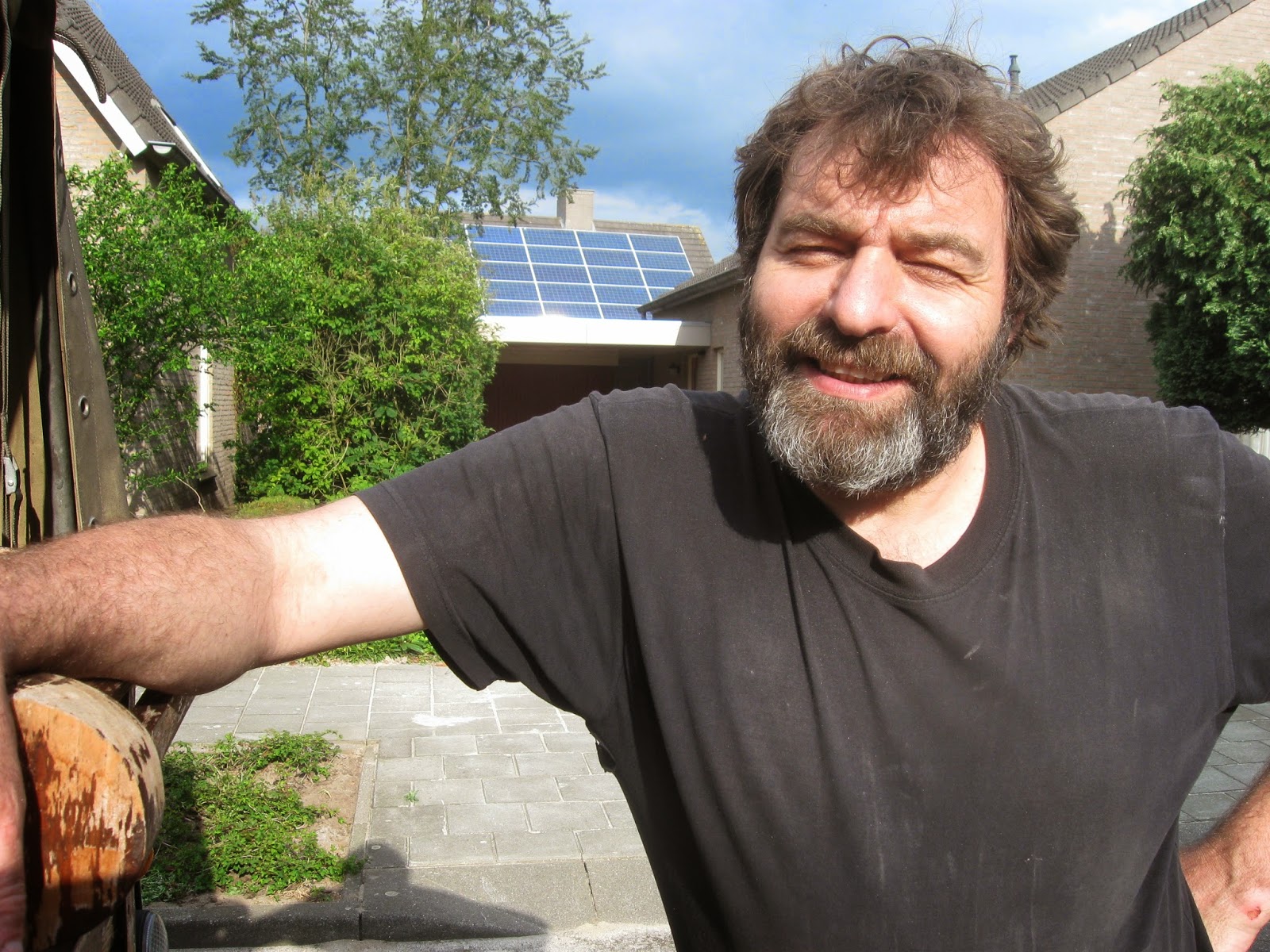 Friday, 13-June-2014 - Veghel - Rik Ruigrok (photo) came over to pickup our teakwood garden bench.  I got it for free and repaired it a few years ago.  I enjoyed it in our backyard, but I knew it would get a new life at Herso.  Rik took time to share circular economy ideas and real world examples of how it works.  I felt so rejuvenated after bathing in Rik's energy. pics (2) 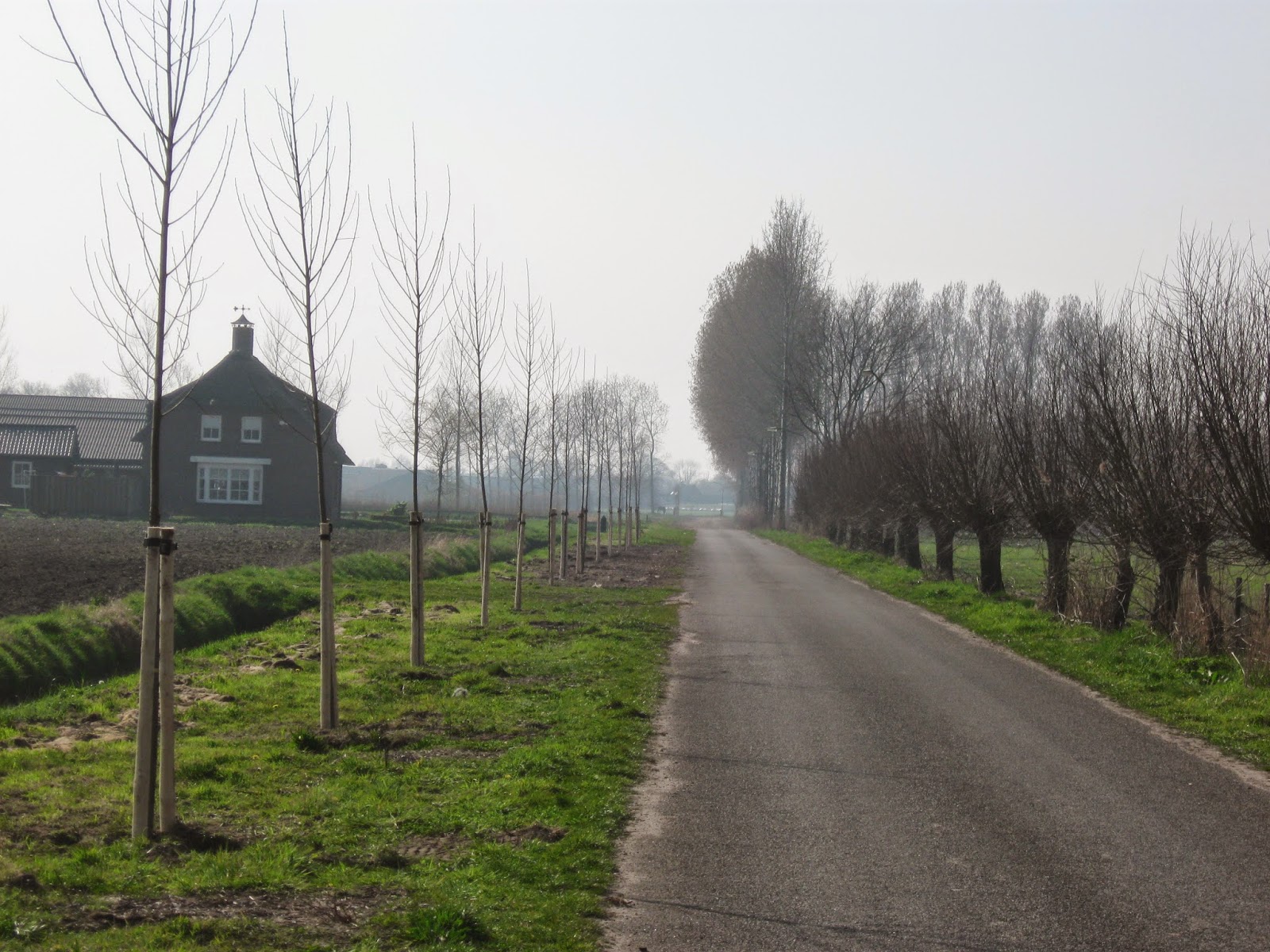 13-March-2014 - Zijtaart - The township of Veghel came through with their promise to re-plant popular trees along the Erpsesteeg in Zijtart.  Oak trees were also planted along the Holstraat.  pics (13)
Posted by dale weiss at 6:35 AM No comments: 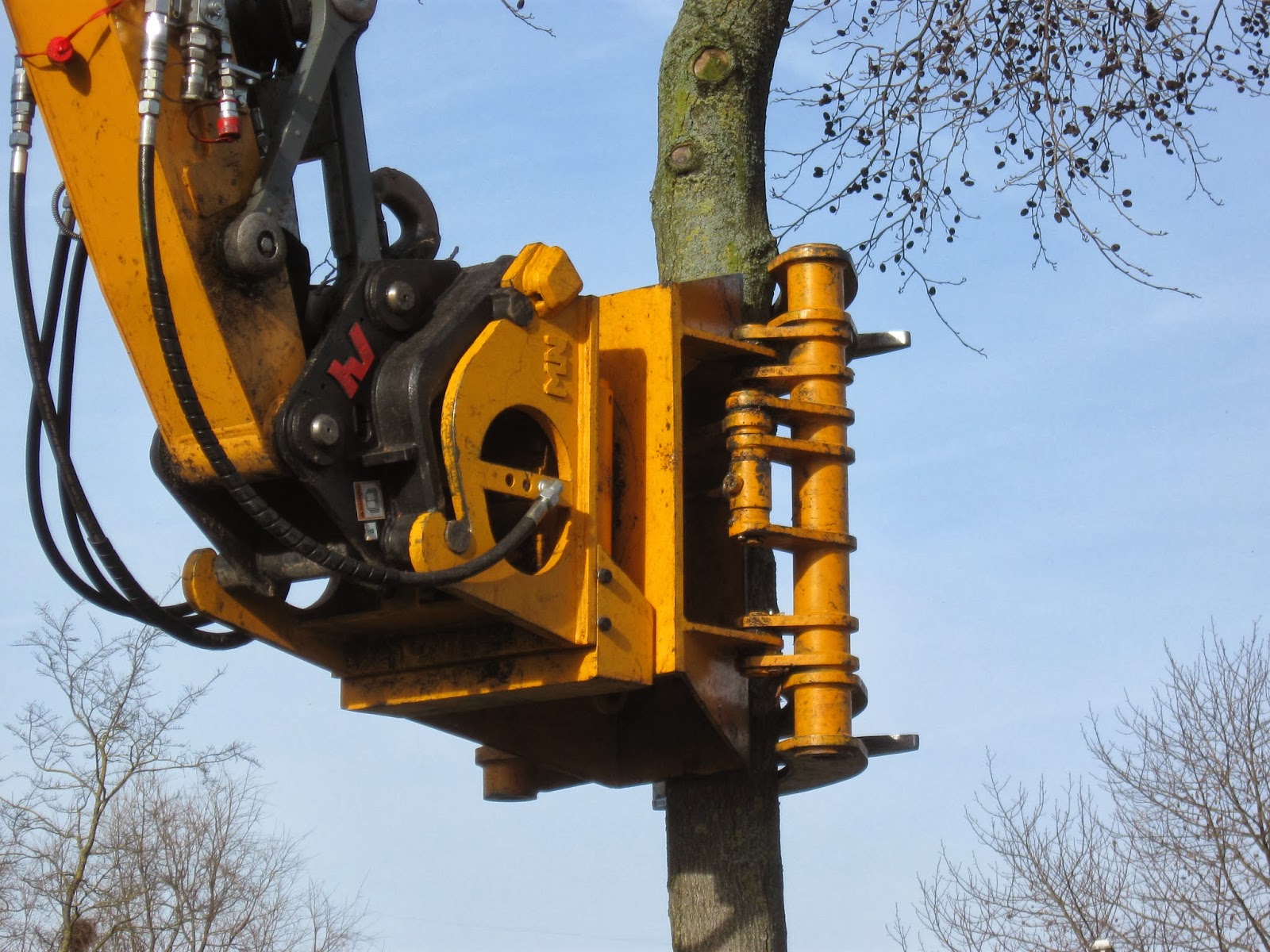 Posted by dale weiss at 8:00 PM No comments:

Leave Me Standing tall--Let Me Live 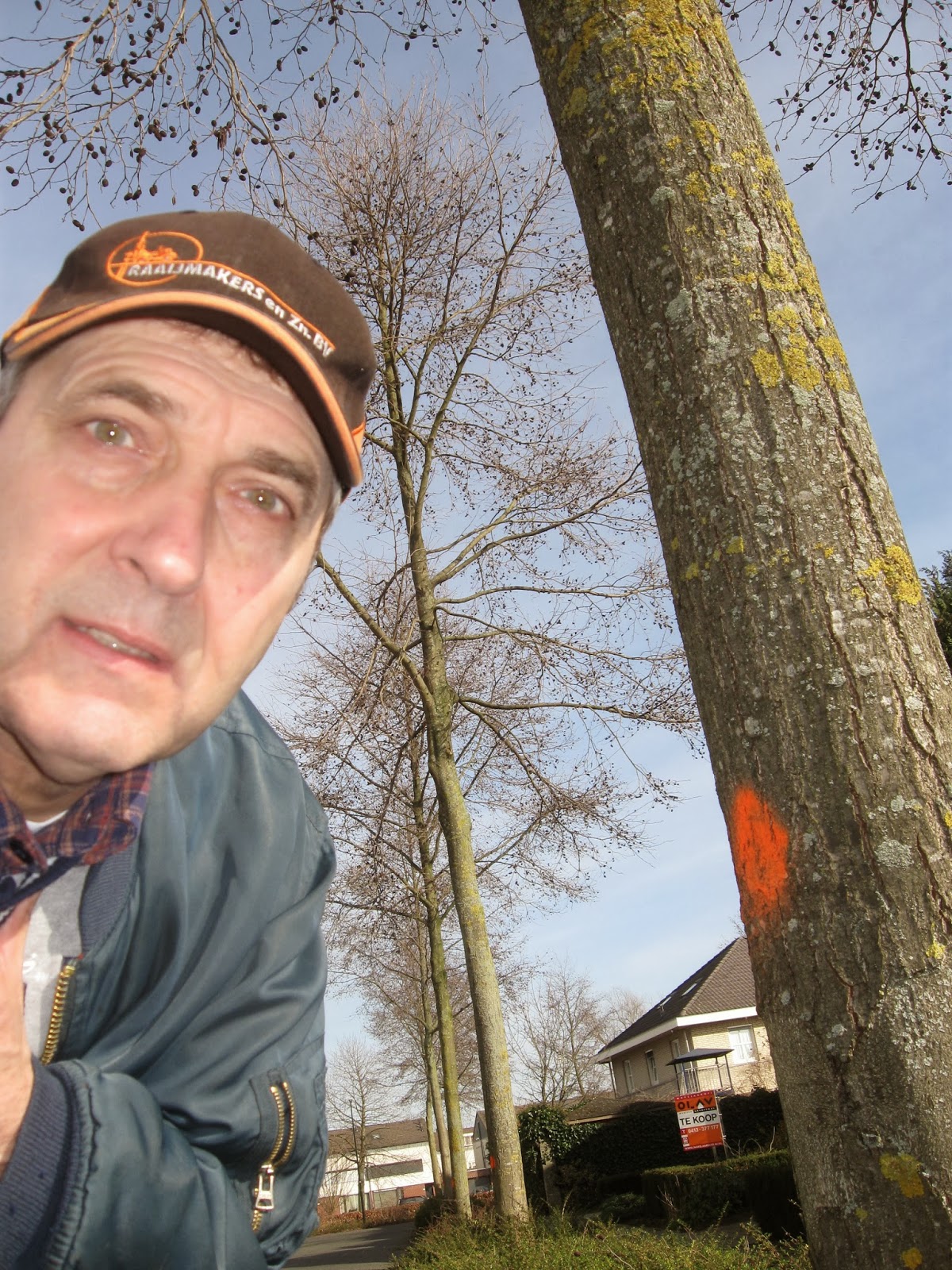 Saturday, 22-February-2014 - Veghel - My Dutch name is Els (Alnus incana).   I'm 21 years old. I'm strong and healthy. I've been standing here on this spot, growing up, since 1997, after the homes around me were built and people started to live here, on what used to be a green meadow.  The town of Veghel is planning to cut me down along with 72 other grey alder trees circling, protecting, the Spoorven, the residential area where I live.  Please leave me standing tall--let me live. I can't speak, but you can.  What can you do?
1) Press "like" here on Facebook to tell Veghel that you want me to live.
2) Stand next to me, or the alder tree nearest you, for an hour from 0600-0700 on Monday, 24-Feb-2014 and hold up this sign. Tape it over the orange dot before you leave.
3) Report your concern to the Town of Veghel using the digital form here.

Posted by dale weiss at 7:32 AM No comments:

Saturday, 20-July-2013 - Veghel - Derek Bailey, chairman (retired), Grand Traverse Band of Ottawa and Chippewa Indians (Anishinaabek Original Peoples) is one of the individuals endorsing the campaign to Ban  Fracking in Michigan. In 1836, 13 years before my ancestors Christina Feinauer and Johann Georg Weiss arrived in Frankenlust Township, chiefs, including those of the Grand Traverse placed their mark on the Treaty of Washington, relinquishing ownership of 37 percent of the current land area of what is now the state of Michigan (photo).
Anishinaabek Turtle song (2:46)
First Speakers: Restoring the Ojibwe language  (56:41)
Posted by dale weiss at 2:52 AM No comments: 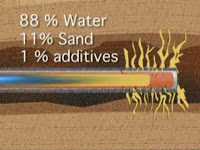 Saturday, 20-July-2013 - Here is a short animated presentation by the El Paso Corporation on how hydraulic fracturing (commonly referred to as fracking) is performed.
Hydraulic Fracturing 101 (4:16)
Posted by dale weiss at 1:13 AM No comments:

dale weiss
Veghel, Netherlands
I was born in 1949. We lived by a big hickory tree, near a creek on a corner of my grandpa's farm in Amelith, a church community five miles from the edge Bay City, Michigan, USA. I often wondered if this tree was standing when my ancestors Christina Feinauer and Johann Georg Weiss arrived here from Bavaria one hundred years earlier. See my "Big Hickory Tree" post in this blog. Note to readers: Google Error 404 NOT_FOUND. Due to a Google "upgrade", links to my photos posted before 2-Aug-2016 no longer work. to view these photos, please replace the following code in URL: "dale.weiss.planet" with "117287349263114002984". Sorry for the inconvenience.